by Augie Byllott | Get Involved

Steve Flewelling, Rob Arnold, my lovely wife Audrey and I went to Washington, DC last April, representing Central Florida’s real estate investors.  It was a whirlwind trip, sorry, no sight seeing and no cherry blossom sightings to report. We arrived around 5pm Tuesday, got to the hotel about 6:00 pm, went to a brief reception and then to a briefing that lasted until 9:30 pm.

Breakfast was scheduled at 7:00 am and our first briefing of the day began promptly at 7:30 am. We then had a day full of meetings which lasted until 5:30 pm caught a car back to the airport for an 8:00 pm flight and got home at about 1:00 am. I told you it was a whirlwind…but it was like nothing any of us had ever experienced! 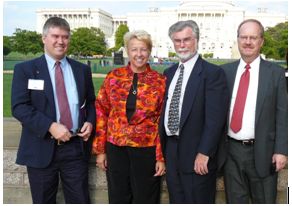 The National Real Estate Investors Association arranged a Day on the Hill for 50+ real estate investors from around the country, meeting with various legislators about significant issues facing the housing industry.  Our primary purpose was to discuss two items: the Foreclosure Rescue Fraud Act (drafted by Senator Herb Kohl of Wisconsin) and the Installment Sale Proposal, which we’re hoping one or two of the legislators will consider sponsoring and move forward with it.  We were also there to make our presence known in that National REIA represents over 40,000 small businesses in 41 states and to assure our elected officials that we are a resource they can rely on.

In addition to real estate investors and board members from National REIA were representatives from our co-sponsor, Homevestors. In all there were about 60 of us. We were divided into 6 teams and

the National REIA lobbyists made arrangements for each team to meet with representatives from our respective states.  Over the course of the day our groups attended about 50 different meetings, with members of Congress, Senators and legislative staffers.

Our team consisted of five from FL and four from two other states; we were led by National REIA lobbyist, Barry Lefkowitz (See my other post about getting involved as a Legislative Monitor).  Barry was unbelievable; he set up ten meetings on Wednesday for our group alone and we were running between 4 different buildings, depending on where the legislator’s office was. I’ll bet we hiked 4-5 miles during the course of the day. We were lucky to be in his group because he knew the shortcuts through the basements and how to get from one office to the next (I’m sure that without him we’d have needed GPS). Meetings were held in offices, hallways and even one in the cafeteria.

We met with quite a few staffers and legislative aides (don’t let that titles fool you, they were very knowledgeable and many of them are the future leaders of this county) and we also met with some of the Senators and Congressmen themselves.  We were particularly impressed with Congressman J. Gresham Barrett, of South Carolina and Congressman Peter Roskam, of Illinois as well as Congressman Steve Chabot, of Ohio.  We were especially pleased to meet and speak with Congressman Ron Klein of Florida. 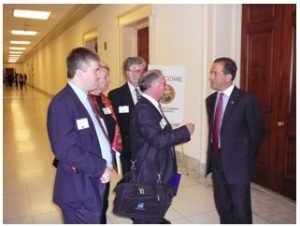 All the legislators and their staffs were genuinely interested in what we had to say, especially in this housing market.  Barry and his team have been working with Senator Kohl on the Foreclosure Rescue Fraud Act and the recommended changes have already been adopted prior to his bill being introduced. While it is likely that this bill will get attached to some other piece of legislation, it is a better bill now than what was originally proposed. This is primarily due to the fact parts of the original bill were very unclear and loosely defined which would create so much latitude for judicial interpretation; it would actually have the potential to be more harmful than helpful in protecting consumers in the throes of foreclosure.

One of the primary goals of the day was to offer our service as subject matter experts and help our elected officials avoid the Law of Unintended Consequence. I’d like to think we succeeded. But this was just a first step on a long journey.

As a final note, Barry’s associate Charles shared a definition of democracy as a form of government in which, “you are welcome to choose to be at the table or on it.” We need to be part of the process of defending our industry from excessive legislative interference as well as an ethical force in our industry. I, along with our other committee members invite you to serve in any number of roles with CFRI’s Legislative Task Force. We need local monitors, researchers, writers and others for more task oriented activities.

Benjamin Franklyn is credited with the following quote, it was never more appropriate; “We must all hang together, or assuredly we shall all hang separately.”

This is a great opportunity for controlling our destiny. Get involved today! Thanks!

Pick up our free Investor Newsletter.
Each power-packed issue contains:

You have Successfully Subscribed!

We respect your privacy and will never rent or sell your email address.